The Grim Adventures of Billy and Mandy Wiki
Register
Don't have an account?
Sign In
Advertisement
in: Crossovers, Comics
English

Super Secret Crisis War is a 6-issue comic miniseries published by IDW Publishing. The series will involve a crossover between five Cartoon Network series: Ben 10, The Powerpuff Girls, Dexter's Laboratory, Ed, Edd n Eddy, and Samurai Jack. It is scheduled to be released in the summer of 2014.

The evil demon Aku (Samurai Jack) has created the "League of Extraordinary Villains", composed by malevolent villains from different universes of Cartoon Network. When his evil robots begin to make an appearance in different worlds, heroes from The Powerpuff Girls, Ben 10, Dexter's Laboratory, Ed, Edd and Eddy and Samurai Jack team up to stop the evil plan of the "League of Extraordinary Villains".

Relationship with The Grim Adventures of Billy and Mandy

Although "The Grim Adventures of Billy and Mandy" is not a major series involved in the crossover, it has been confirmed to be present as the protagonist series of parallel chapter by Kate Leth to be included in the third edition, on sale in August 20, 2014.

After one of Aku's robots ends up merged with one of Vilgax's robots due to a malfunction, it lands at Endsville Elementary School. Billy and Mandy are interested in the robot (Billy wants to keep it and name it "Samuel," while Mandy wants to get rid of it), while Grim is merely confused by its existence. As the robot starts causing havoc, the protagonists must end the chaos in Endsville. 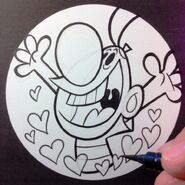