The Grim Adventures of Billy and Mandy Wiki
Register
Don't have an account?
Sign In
Advertisement
in: Article stubs, Crossovers, Comics

Scooby-Doo takes the Detour on Teletoon

View source
"Well, you can't write much if you don't have a brainnnnnn..."

This article is a stub.

You can help The Grim Adventures of Billy and Mandy Wiki by adding more content.

Scooby-Doo takes the Detour on Teletoon is a crossover comic featuring The Grim Adventures of Billy & Mandy and Scooby-Doo, as well as many different adult cartoon series. It was released in 2004 on the French comedy magazine called "Safarír".

Scooby-Doo takes the Detour on Teletoon

Grim and Mandy summon Scooby-Doo to help them track for someone who scared Billy on his sleep. 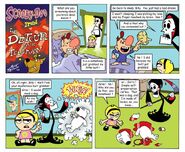 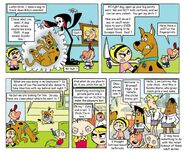 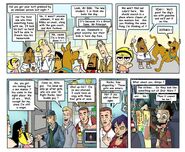 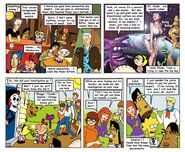 A deleted panel from the comic, courtesy of the artist's deviantart.
Community content is available under CC-BY-SA unless otherwise noted.
Advertisement