The Grim Adventures of Billy and Mandy Wiki
Register
Don't have an account?
Sign In
Advertisement
in: Characters, Males, Grim & Evil characters,
and 3 more
English

10 years (according to Billy, this is a "gagillion" years in hamster years)

Billy's hamster
Mr. Snuggles is Billy's old hamster. He was the whole reason Grim came in the first place and became the kids' best friend/slave to begin with.

He is very old when he is seen in the show. His only major role was in the pilot but he had made a few cameos in some episodes. In The Incredible Shrinking Mandy, he rescued Milkshakes from a fire and performed CPR on her only for her to eat him, later on he escapes.

Some summaries erroneously state that Mr. Snuggles is sick even though he has never shown any symptoms of being so, though Grim described him as being sick in Mortal Dilemma. 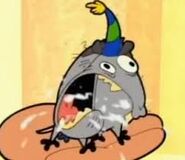 Mr.Snuggle before biting anyone
Español
Community content is available under CC-BY-SA unless otherwise noted.
Advertisement