The Grim Adventures of Billy and Mandy Wiki
Register
Don't have an account?
Sign In
Advertisement
in: Characters, Members of Irwin's Family, Humans,
and 9 more
English

The Halls of Time

Student
Melvin Dracula has only made a single appearance in the series. He is Irwin's older brother and like him, Melvin is half mummy and 1/4 vampire.

Melvin only appears in one episode of the second season, The Halls of Time.

Irwin mentions that he is a jock and a bully who often picks on him. When Irwin, Billy, and Mandy are taken to the Halls of Time by Grim for a field trip, they discover that the hourglasses represent people's lives.

Irwin decides to get revenge on Melvin by shaking up the glass. The effects are shown when he is flirting with a cheerleader. The hourglass causes him to turn into a baby, then an old man. After Billy shows Irwin his hourglass, Irwin drops Melvin's hourglass, breaking it and possibly killing him or wiping him from existence.

He is never seen again, although he is referred to once by Irwin in "Billy & Mandy Begins" when dangling above a giant worm that is about to eat Mandy, Billy, Grim and himself (Irwin says "This sort of thing never happens to my brother..."), indicating that he is still around. 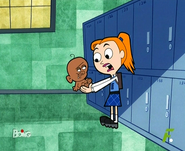 Melvin as a baby 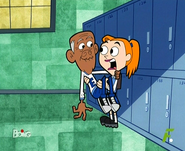 Melvin as a aged man
Español
Community content is available under CC-BY-SA unless otherwise noted.
Advertisement