The Grim Adventures of Billy and Mandy Wiki
Register
Don't have an account?
Sign In
Advertisement
in: Voice Cast Members, Actors
English

DeLisle was born in Fort Ord, California, and had a difficult childhood; her mother was addicted to drugs. She was primarily raised by her grandmother, Eva Flores Ruth, a vocalist who performed with salsa legend Tito Puente.

DeLisle was heavily into goth bands like The Cure, but her mother, who had become a born-again Pentecostal, set a strict rule forbidding secular music. In her late teens, she started singing old gospel tunes, and entered the world of stand-up comedy on the advice of a close friend. In her comedy routine, DeLisle imitated voices very well, and was advised to take a shot at voice acting. Her first starring role came in the first English version of Crayon Shin-chan, as the voice of characters Cosmo and Uma, in 1994.

Billed as a "Superstar Voice Actress" on the Anime News Network, DeLisle currently plays the leading role in at least six current animated series. Harp has called Delisle "golden-voiced" and recognized her for her roles in The Fairly OddParents as Vicky and Tootie and What's New, Scooby-Doo? as Daphne as well as Clifford the Big Red Dog and its' prequel, Clifford's Puppy Days as Emily Elizabeth. In addition to her numerous English-speaking roles, she also speaks Japanese as the character Yumi on Hi Hi Puffy AmiYumi. DeLisle has had voice acting roles in many computer and video games, such as Escape from Monkey Island, Baldur's Gate II: Shadows of Amn, Lara Croft Tomb Raider: Anniversary, and several Star Wars games. As a voice actress, She portryas the Dark Jedi, Asajj Ventress, in 5 episodes of Star Wars: Clone Wars and reprises her role as Ventress in a bonus level in the Force Duel mode of the PSP version of the video game Star Wars: The Force Unleashed. As a voice actress, she portrays Azula on Avatar: The Last Airbender, several voice roles (though mainly Mandy) on The Grim Adventures of Billy & Mandy, Darlene Spritzer on Lobo, Therese and Jeanette (Tourette) Voerman in the White Wolf RPG PC game Vampire The Masquerade: Bloodlines, Frida Suárez in El Tigre: The Adventures of Manny Rivera, and Sam Manson in Danny Phantom. DeLisle has released four music CDs, which include goth-inspired folk and Americana tunes, and a few gospel-style songs. She is currently known as the voice of Catwoman from the Batman: Arkham games. She voices Lola, Lana and Lily on the Nickelodeon series The Loud House. Since 2019, she voices Martin Prince and Sherri and Terri from Fox series The Simpsons, replacing Russi Taylor's roles after her death. 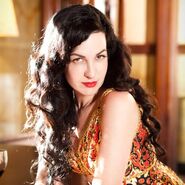