Being told what to do

Apple of Discord
Eris is the Goddess of Discord and Chaos. Eris used to receive a large allowance from her Father ("Daddy") every month up until "The Firebird Sweet", when Eris had to get a job after being grounded and cut off by her father for consistently using "that infernal apple."

Eris is a curvaceous and beautiful, but seductive and vindictive woman with long blond hair and dark blue eyes. She is shown to have a gap in her teeth (although in her debut episode and "Chicken Ball Z", her teeth were perfectly normal).

Her style is somewhat Greek-related, being a mythological/legendary Greek goddess.

Eris is a divine sadist who likes to cause all kinds of chaos and destruction. She is the keeper of the Apple of Discord, a golden apple that can transform into any shape to assist her into wreaking havoc. Billy refers to it as "the Magic Banana" (even though he identified it correctly in Causing Chaos) due to its yellow color.

Her accent and behavior are prone to sudden shifts, from a stereotypical teenage valley girl (which was shown in "To Eris Human" and described as a phase by Grim, who once had a crush on Eris) to a refined British or Transatlantic woman.

Eris appears in "Wrath of the Spider Queen", attending the same school as Grim, Velma Green, Nergal, Lord Pain and Boogey. She also has a transformation ability, where she could change into anything (even small parts such as her face).

She was also secretly the focus of "Happy Huggy Stuffy Bears" and "Chicken Ball Z", where, in the former, she a pseudonym known as Serisue, and was behind the havoc caused in the episode, planning to make the children zombies. In the latter, she transformed into a Chinese guy, and gave Mandy the chicken ball, which caused her to become a Super Sayain-like being. In both cases, Grim found out that the disguises were really Eris. This was because of an obvious fake name or talking about chaos in a matter she usually does.

She briefly dated Hoss, whom she said brought order to her chaotic life. However as the divine personification of chaos, bringing order to her caused an unnatural excess of it throughout the universe, finding that this was why he hadn't found a monster to fight in weeks, so he decided to break up with Eris (who did not take it so well).

Some chaos that Eris has caused was giving kids blue, brainwashing teddy bears, selling cereal with an Underworld species of Phoenix inside every box, turning Mandy into a fighting monster, giving away golden apples so that they would do her bidding of chaos and destroying Billy's house with giant alien zombie lobsters.

As an immortal goddess of infinite cosmic power, Eris has the power to cause chaos and discord, disorder and imbalance. She also has the ability to make her Apple of Discord shapeshift into a different form; namely ordinary objects and even food:

While selling out her Happy Stuffy Huggy Bears, she had transformed to loo k like a black-haired woman with curly hair and blue glasses. 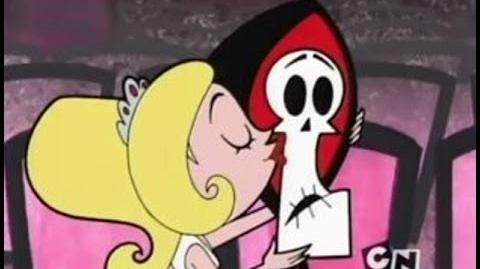 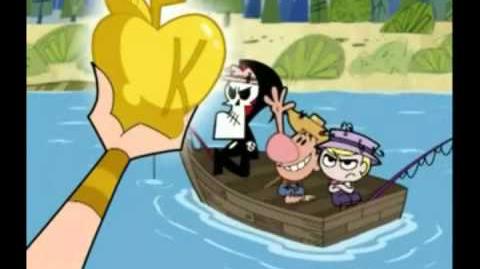