The Grim Adventures of Billy and Mandy Wiki
Register
Don't have an account?
Sign In
Advertisement
in: Characters, Monsters, Males,
and 4 more

Dickie Galoot is a monkey, who only appears once in "Hurter Monkey" and serves as Grim's replacement. He is voiced by Dee Bradley Baker.

Dickie is from Billy and Mandy's most beloved TV show The X-Treme Adventures of Brandon and Mallory. After Mandy points out that even a monkey could do Grim’s job, Grim decides to bring the monkey out from the TV show for Billy and Mandy’s personal use. Dickie’s card briefly mentions that any command, he will execute, so Mandy quickly takes advantage of him. Dickie is proven very useful and enjoys his job and Grim, frustrated and enraged, tries to leave although he is unable to because his scythe will not let him break his friendship contract with the kids. Grim must then get rid of Dickie or face eternity in the Underworld Jail. Towards the end, Dickie is proven to be able to talk and claims that Grim has a nice life and that he wants it and he despises Brandon and Mallory. Dickie is defeated by Grim in a brief clean-off (based on a Mexican standoff) and is sent back into the "TV world" with Brandon and Mallory. 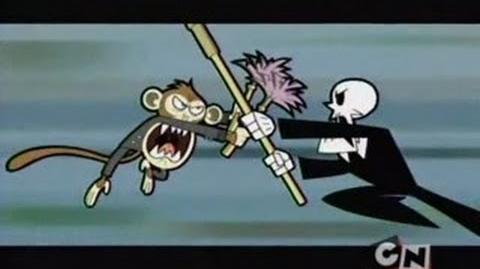