Good to the soul

Richard "Dick"' Dracula is Irwin and Melvin's dad. He is as dorky as his son and married a mummy named Judy. He is a half human and half vampire, as he is actually the son of Dracula.

He says the word "dude" when he is done talking, similar to Irwin saying "yo" and Tanya saying "baby". He is a good hearted person, but sometimes gets mad at Irwin (for all kinds of stuff). Just as Billy and Irwin are best friends forever, Dick and Harold are also best friends forever. 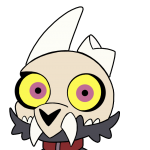