The Grim Adventures of Billy and Mandy Wiki
Register
Don't have an account?
Sign In
Advertisement
in: Characters, Wizards, Giants,
and 3 more
English

He was voiced by the late John Vernon from seasons 2 to 5, and then Ronnie Schell in season 7.

Toablatt is the Dean of Toadblatt's School of Sorcery. His favourite house is Gunderstank House, and he despises Weaselthorpe House (describing it as being "full of nincompoops, freaks and weirdos") and in particular Weaselthorpe member Nigel Planter. Toadblatt often goes to great lengths to try and get Planter removed from the school, including disguising himself as the feared Lord Moldy Butt in an attempt to scare Planter away during "Nigel Planter and the Chamber Pot of Secrets".

Toadblatt owned a Cumulon-6 broomstick, of which he was very fond, until it was destroyed by a dragon released by Billy and Mandy in an attempt to discredit Gunderstank House during the house championship in "Toadblatt's School of Sorcery". 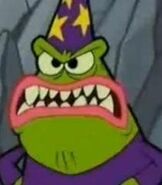