Company Halt is the 9th episode from season 7 of The Grim Adventures of Billy & Mandy. The episode is a crossover with Evil Con Carne.

Hector has started the Evil Con Carne back up and needs Skarr to join back. Skarr does not want to join back at first, but when Hector agrees Skarr can destroy all of his neighbors in the process of ruling the world, he agrees to join. After Hector using all of Skarr's money to pay for weapons the build a big tank like weapon which fires giant rubber bands at every thing destroying parts of the town. However Billy and Mandy trick Hector into hitting Skarr's garden with one of the rubber bands, which makes Skarr very angry and attack Hector. After this Hector chucks Skarr into one of the tanks and one of the weapons fall of said talk and lands on Hector leaving all his goons to run away in fear, leaving him powerless. 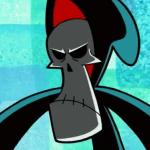