The Grim Adventures of Billy and Mandy Wiki
Register
Don't have an account?
Sign In
Advertisement
in: Video Games, Crossovers, Games
English 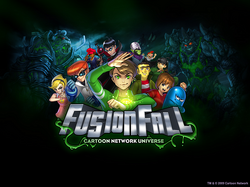 Cartoon Network Universe: FusionFall is an online game developed by Cartoon Network and Grigon Entertainment. The idea is to take control of a custom character for us traveling the FusionFall's universe in order to save the new threat. On the way they encounter characters from the Cartoon Network series like The Powerpuff Girls, Ben Tennyson (Ben 10 Alien Force), Mac and Bloo (from Foster's Home for Imaginary Friends) and many others...

During the first year of service, the complete set required a paid subscription. Free accounts could only access a part of the game content. However, this distinction has ceased to exist after the date April 19, 2010, where FusionFall became a game free.

Planet Fusion is a new danger that is about to conquer the Cartoon Network earth. So all the characters of the Cartoon Network heroes ( Toonami, Dexter's Laboratory, Jonny Bravo, The Powerpuff Girls, Ed,Edd and Eddy, Courage The Cowardly Dog, Samurai Jack, Codename:KND, Foster's Home, The Life & Times of Juniper Lee, Ben 10, Chowder, Jonny Test, Flapjack, The Secret Saturdays, Adventure Time, Generator Rex, Sym-Bionic Titan, and of course The Grim Adventures Of Billy & Mandy) gather and make an aliance so they can stop this grave danger.

The Billy and Mandy universe has joined with the world of the rest of Cartoon Network series, creating to the Cartoon Network Universe, but has only been joined the city of Endsville.

Another connection are various characters and items that are shown below.

The Nanos are one of the main components of FusionFall leveling system. They are miniature versions of the characters in the series designed to help the player through various means.They are the strongest weapon against fusion. Itselfs are made by fusion Matter and Imaginary Energy to stabilize them.

Then the Nanos in the series that appear in FusionFall.

Then, the objects of the series appearing in FusionFall. (It may be incomplete)