Billy Gets an "A"

Billy Gets an "A" is the 5th episode from season 7 of The Grim Adventures of Billy & Mandy.

Billy once again fails a test, so he has Grim turn his “F” into an “A.” When he does that all, everything becomes the opposite of their usual selves, such as Harold and Gladys switching genders and roles, Pud'n becoming a bully while Sperg becomes a wimp, and Irwin becoming a suave ladies' man. Even Ms. Butterbean becomes nice and caring. Strangely, only Mandy remains her usual bossy and wicked self. Grim realizes that changing Billy's test caused everything in the universe to turn opposite. Tired of the imbalance in the universe, he tries to change Billy’s grade back to the way it was, but it doesn’t work, so he and Mandy decide to go back in time to stop Billy, but they fail every time. 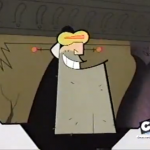