The Grim Adventures of Billy and Mandy Wiki
Register
Don't have an account?
Sign In
Advertisement
in: Characters, Hanna-Barbera Characters, Humans,
and 2 more 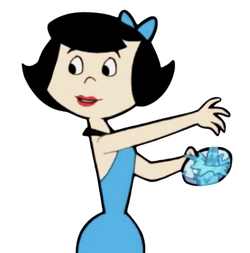 Elizabeth "Betty" Jean Rubble (née McBricker) is a fictional character from the television animated series The Flintstones and its spin-offs and live-action motion pictures. She is the black-haired wife of caveman Barney Rubble and the adoptive mother of Bamm-Bamm Rubble. Her best friends are her next-door neighbors, Fred and Wilma Flintstone.

She first appeared in the credits of the episode Modern Primitives, where she is voiced by Grey DeLisle.

Community content is available under CC-BY-SA unless otherwise noted.
Advertisement